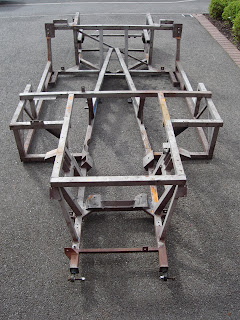 Finished removing the last few bits from the chassis this morning after a head scratching moment over the weekend.

On Sunday i tried to remove the rear axle (which weighs a ton) and once i had removed the Koni Shocks/Panhard rod and trailing arms i was left with a axle that was sitting loose inside the box chassis and due to the oversize brake's the backplates still attached to the axle were too big to let me slide the axle out either side of the chassis. Knowing that Nicholas (previous owner) had previously done this i sent him a email and 10 minutes later i had his answer, impressed as he was the other side of the world now living in Canada. It was simply a case of remove the brakes, undo the 4 bolts that hold the backplate's on and then slide the half shafts out each side, i was expecting oil to come gushing out all over the garage floor which didn't so must remember to empty completely and refill with some new oil when ready. Once the Halfshafts were out of the way the axle (still very heavy) could then be manoeuvred through the box chassis safely onto the floor.

On inspection of the chassis, the middle area and upper part all appears sound protected from the elements by the bodywork and nice warm engine however both outer sill rails that run the length of the car along with the 4 outrider rails each side are as good as rotten, most probably from water thrown up by the front wheels, i could probably get away with just replacing the outer sill rails only but intend doing this body-off job once only so will be doing a thorough job and then look at ways to protect it from the British weather, so much for global warming.