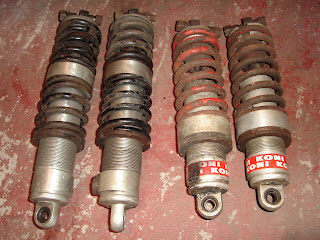 Have now taken the axle, trailing arms, rear anti-roll bar, brake rear plates and Panhard rod in for shotblasting and Powder coating (the axle is just being masked and shotblasted and I will apply several coats of black paint by hand). I have also now dismantled the pedal assembly box and re welded a couple of the joints to tidy it up ready for powder coating and are also about to order 3 new shiny Girling brake/clutch master cylinders to fit.
When I dismantled the axle I noted that the rear brake shoes were almost new and thought I should order new brake cylinders for piece of mind (and wanting shiny new ones as well !), not being sure exactly which model part they were (Marcos were a typical small car manufacturer in that they used a variety of parts from different production cars) I did some ebay searching and they appear to be 3000 Capri cylinders so fingers cross they should be the right one's when they are delivered.
When the deep rich red (colour code 3003) suspension parts are ready to be collected from the powder coaters I will be taking in more items to be treated including the springs from the shock absorbers so with a turnaround of about 10 days for these items realistically it will be some weeks yet before I can get it sitting on it's wheels again ready for the next stage. I do recall seeing a Marcos at Cosford last year with chromed suspension arms which I thought looked very smart and I will be making some enquiries at a local firm to see if mine can be chromed and how much it will cost.
The Koni shock absorbers whilst looking very tatty on the photograph are now looking a lot better as I have cleaned up the aluminium bodies on them with lots of elbow grease and will try to finish them off with some sort of aluminium polisher and were keen to try to clean these up as they don't have any leaks and especially after I spoke to Koni who confirmed they were quite special ones and also fully serviceable, the front are Koni 8212-1139 and rear 8212-1406 and the last digit "2" apparently means they are the lightweight version of the 8211 series.
Once the springs are returned after coating I shall post some new photo's to show their improvement.
Must say Hi to Richard who is also restoring a Marcos from scratch, he only started a couple of months ago and is catching me up by the day,
Martyn
11/04/2009

Hi Martyn,
The shocks are indeed a bit special - someone told me (Eddie?) that they were from an F1 Tyrell??
Although they don't leak, I do think that they need to be serviced as a couple of them push and pull too easily.
The shock mount bushings are all new, so you shouldn't need to replace them (I had to source them from the US as the prices that UK suppliers wanted were ridiculous!!)

It's all looking great tho'!! Gonna be so jealous once you finish it!!
Take Care,
Nick

Thanks for the comments, always appreciated.
I was considering sending them to a Koni specialist for a service and they are quoting approx £80 each for a basic rebuild. I was going to put them on the car and see how they were before deciding.

You must come and visit us when you are in the UK next,