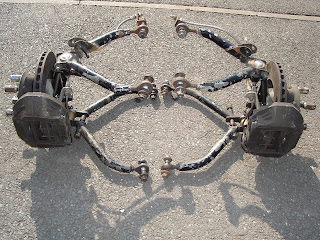 Saw a Marcos last year at the annual rally at Cosford that caught my eye with it's chromed front suspension and have been making some enquiries locally to see about getting mine done the same especially with it being the purposely made tubular type. Should look really smart with the blue chassis and red springs.
Anyway after several phone calls to various chrome platers in the black country I was directed on more than once occasion to ACF Howell of Croft Street, Walsall (01922 649992), no website to view so tracking them down in a back street and knocking on some old door I was welcomed inside by a elderly guy who showed me to a workroom where it was like stepping back in time and full of gleaming springs, massive chrome bumpers and various other parts of motorbikes all hanging from the wall, it sure was a sight. He asked me what car the suspension was from and when I said "Marcos" I was ready for the usual puzzled look that 99% of people give you (other Marcos owners will know what I am on about here) he said "oh yes" and pointed to a small photo of a blue Marcos Mantis on the wall, I was impressed ! After a chat and some reassurance that they could do a decent job on the suspensions arms I left it with them and hopefully in about a week they should be ready, roll on payday !!
Martyn
22/04/2009
Posted by Martyn