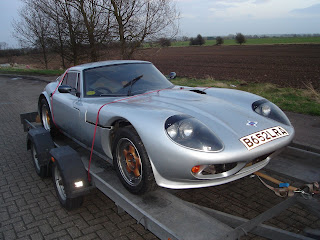 What a journey, 2 days later i am still tired.

Left home at 7.00 in the morning to collect my brothers car (thanks Steve) and trailer and then off i went down the M1, Kent bound arriving early afternoon and a bit concerned about all these windy weather warnings and stories in the news of overturned lorries etc, especially with the Dartford Crossing ahead of me. I haven't towed a car-trailer for some years and when i arrived at Gravesend, Kent to meet Nicholas who was passing the car onto me I was struggling to reverse the car and trailer around a corner into a spot where we could get the Marcos onto the trailer, after some rubbish attempts by me i was offered a quick lesson on the art of trailer reversing which is basically don't look over your shoulder, use your side mirrors and steer the car the opposite way to which you want the trailer to turn, looks easy watching !!.

After a lengthy chat with Nicholas who seemed genuinely sorry to see her go however he and partner are emigrating to Canada next week and he had tried to export the Marcos with him but with apparent restrictions due to the age of the car he was refused and would have had to store it here in the UK for 3 years and try again, not wishing to wait 3 years in case the rules changed again he reluctantly decided to sell.

The Marcos was duly loaded and strapped down securely, papers in hand i started on the long journey home, unfortunately i did not plan the route back as well as the route going and knew that i had to get on the M25, no problem, then the M10 and then onto the M1, i got slightly confused here and did the M25 and forgot my numbers and went for the M11 instead of the M1 (very similar when your tired) so off i went in the general direction of Cambridge and only realised some time later when i then had to divert and go cross country lanes to get back to the M1, still the number of thumbs up of approval i received from passing motorists made me smile, if you have never seen a Marcos in the flesh before they really are quite a sight.

Finally got home in the dark and then I had problems getting the Marcos back off the trailer due to the low body and exhaust, eventually with the help of Kim who did not moan once whilst on winch duty even when the rain and the hail started.

We finally managed to get the Marcos in the garage about 10 o'clock, god knows what the neighbours were thinking of us.