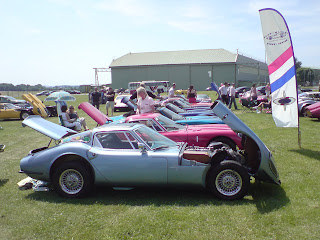 Had a entertaining weekend at the Marcos Annual Rally both at Curborough Sprint Circuit near Lichfield on the Saturday and at RAF Cosford on Sunday, quite envious of those actually driving their Marcos, one day !!!
I also had the opportunity to speak to some of the members there who knew of my car and some of it's history and was urged to get it finished for the 50th year Anniversary of Marcos next year, sadly with the amount of work to do and only really wanting to work on the car when it suits rather than to a timescale realistically it won't be ready for then, an option for me will be to take the car on a trailer. 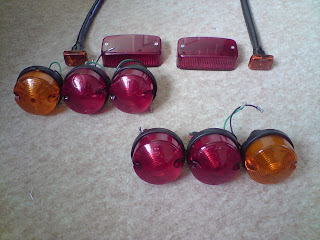 Bargain of the year was had by me this week, I was never quite sure about the rear lights on a Marcos and had noticed that some owners had replaced them with circular units which seemed to suit the classic style, thanks to Ebay again I was the only bidder on a Wipac set from a UltimaSports still in their original bag, their website lists them for the current model at £305 + VAT (what, you must be joking !!) I got them, albeit the old Ultima style for £29.96 inc postage being the only bidder, I think they will look the biz especially if i part recess them in the bodywork.
Re chassis work I have been busy and I have now almost completed one side and as it's quite warm now and working in the garage with the doors down to keep in the noise it really is very tiring work so are taking it nice and easy.
Martyn
09/06/2008.
Posted by Martyn