Spent the last couple of days trying to connect the manifolds to the mid silencer box. Bought 4 x 2" pipes with 45 degree bends in them however it was not quite so straight forward in fitting them as the manifolds pipes under the car were not parallel and both at slightly different angles. So to rectify I cut off the single pipes from the "Y" pieces and tack welded on new sections at slight offset angles so that they ran parallel again, not a easy job trying to do this when the car is only slightly off the ground and must admit it took me several attempts to get the angle right. I also discovered that the single pipes into the "Y" pieces from the old exhaust system had been pushed in too far and both were stopping the exhaust gasses from flowing freely, soon sorted that out with a hammer and old screwdriver. 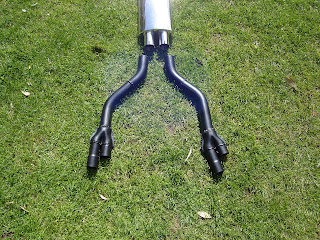 Glad to have finished this section with a sore back and cut hands and will now be able to order some more bits to plan and fit the rear exhaust section,

Some observations... In your engine pic from a few days ago, I notice that the heater bypass hose that runs across the top of the engine looks to be higher than the expansion tank etc - I had issues with air locks in this hose, which is why the old rubber one had the vent in it. Just something to be aware of...

Also, regarding your positioning of the silencer - you recall all the scrape marks on the bottom of the seat wells - speed bumps did that, no matter how carefully you drive over some of them, so I would be a little wary of something hanging lower than the seat bottoms in that area...

Good to hear from you. Re the ground clearance i think i will just have to accept that roads with speed bumps will just have to be avoided, fortunately there are none that i can think of local to me. The heater bypass hose is a flexible type with a little room for movement or i could fit a valve in it that i have seen in some of the motorsport cataloges, will see how it goes once it's heart is beating strong again,