Have made a start on the cool air installation and as there have been a few mentions on the Marcos Forum with different ideas to solve the heat issue here are a few photo's of the work in progress.

Just waiting for a scoop to fit on the front of the 2" pipe which will sit at the front of the bonnet to collect cool clean air whilst moving, I need to wire the motor fan into a switch and then finish off with a 2 into 1 connector which will sit behind the dashboard. The air vents were courtesy of ebay and came from a Afla of some sort.

There is just enough room to fit 2" pipes behind the dashboard and to make access easier I cut square sections out of the wooden panel that sits under the bulkhead and made some square sections of fibreglass sheets that screw into place with the air vents attached to them. I was originally going to route the pipe under the wheel arch but was concerned on full lock the tyre may have rubbed so the pipe will now sit attached to the inner wing inside the engine bay which I think looks a neat installation, so far so good. 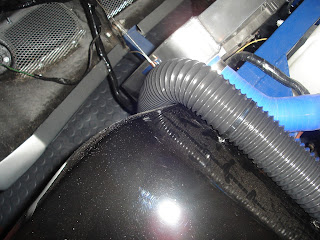 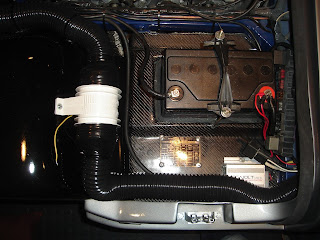 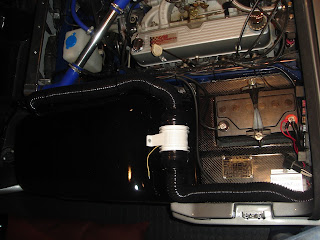 Sadly I won't be able to get to the Marcos Rally today at Prescott in the Marcos. I have worked almost every single free hour over the past few weeks trying to get the car done but time has beaten me and the interior guy who I was booked in for last month let me down big style as for some reason he suddenly decided not to answer his phone or emails when the car was ready to go in, on the plus side I have found another company with a excellent reputation for quality work and the Marcos is booked in for early October to be done, looking forward.

Still hoping to get to Prescott tomorrow to watch a few cars racing up the hill,

Hello Martyn. Your Blog inspired me to the "marcos Restauration site" on Facebook. I own a 3 Liter Ford Essex from 1984 and will bring the car back on the street in 2014. Kind regards Gerald

Hello Martyn. Your Blog inspired me to the "marcos Restauration site" on Facebook. I own a 3 Liter Ford Essex from 1984 and will bring the car back on the street in 2014. Kind regards Gerald