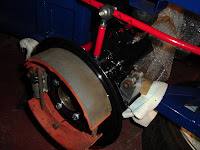 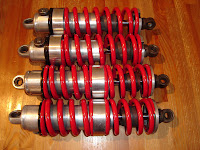 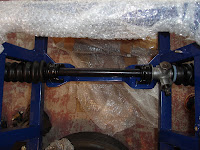 Being doing a few small jobs in preparation for getting it sitting back on it's wheels again, or I was until I strained my wrist yesterday whilst cleaning out the numerous threads on the rear suspension and axle with some taps so will be giving it a rest for a couple of days. So far all the threads have been imperial UNF but the rear axle to brake back plate bolts are 8mm much to my surprise and had to go shopping for a tap to fit.
The rear anti-roll is all fitted up now and the short vertical bar with a twist either way can extend or reduce it's length all due to having opposite threads each end. The rear trailing arms also have left hand and right hand threads each side and work on the same principle so after finally finding some left hand taps on the www I could start cleaning them out. Whilst all this is giving me extra work it hopefully will be of great benefit later on when the axle can be set up to be exactly square with the front wheels.
Also fitted the steering rack after a bit of a false start, first I found the exact centre of the steering and marked it up and on trying to fit it to the chassis the replacement Superflex bushes I bought were a very tight fit and I could not bolt down the half moon securing plates holding the rack to the chassis fully and both were slightly sitting proud one side, after removing them for closer inspection found the bushes to be very slightly wider than the old rubber ones previously fitted. After trying again to refit with the same problem in the end I placed the Superflex bushes in a vice and cut off 2mm from one side of each bush, (ever trying to cut something that wobbles about?) and now matching the old ones in size they fit tightly but perfectly now.
If you notice in the photo of the axle that the half-shafts are not fitted that is because I only have a single garage and do not have the room to slide them into the axle each side so once the front end is on wheels I shall (with a little help) wheel it out of the garage whilst holding up the rear end and walking out with it, I will then be able to slide them in.
The Koni suspension is all looking nice and clean now although are aware the insides do need servicing and having spoke to a couple of approved Koni service agents I have decided to refit them to the car temporarily so that I can finish the suspension and just before the car is finished I can unbolt them and send them away to be serviced, this may seem a little backwards however if I spend the £350 to get them serviced now and the Marcos is not finished for 1-2 years (how long ?) then it will not do them much good just sitting there without any movement in them.