Postman has just delivered a shiny new Edelbrock air filter (model No Pro-Flo 1002) so just had to nip in the garage to see if it fits ? 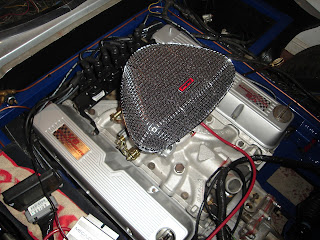 Yes it sits okay on the carb but as expected there are bonnet clearance problems with it fouling on the outer top edges of the filter. I have seen some of these filters already on Marcos cars mounted sidewards to give that little extra room but on trying various options found that if I placed the wider part facing to the front it was only just catching as the bonnet bulge is wider at this point. Options could have been to cut out the bonnet bulge and make it bigger but lots of fibreglass work and not really confident in doing that myself and may also spoil the lines of the bonnet. So having looked at the base of the filter case I decided to cut ¾" from the neck which appears to be just enough to give the clearance needed. I won't really know for sure until the engine is running but hopefully fingers crossed will be okay. I have taken a couple of photographs before and after to show the difference including a under bonnet shot, 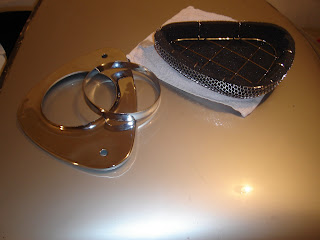 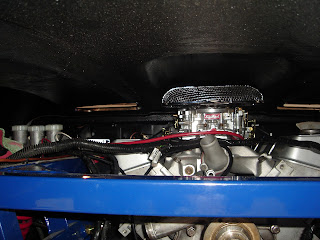