Not much to report other than having ordered a Alloy header tank from Radtec (same Co that made my radiator) hopefully that will be here later this week, I found sorting out the route for the cooling system quite confusing and did slow me down by a couple of weeks however Radtec have given me the info I need to plumb everything in, they are also making me a fresh set of alloy pipes for the cooling as the ones I previously fitted did not have any beading on each end and suggested they might not seal properly with the silicon hose.


Also on the list of things I did not understand fully was the PCV valve (positive crankcase ventilation) which apparently is quite important on these engines, however after many conversations (thanks Chris) and also to Jim of JVR8 in Ireland he told me about their solution to the problem, see photo, which plugs straight into a cut down flame trap and then onto the Rocker cover, I can then feed it straight into the PCV valve on the Edelbrock carb and the vent system finished of by a small cone air filter on the other rocker cover. 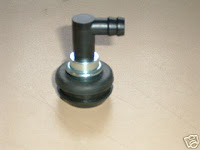 Also on order is a Filter King pressure regulator for the fuel lines which should be here in just over a week, having spoke to Steve of Regent Hose﻿ who is another Marcos Owner and a bit of a expert in this field he will be supplying some fuel line to me however need to wait for the Regulator to arrive to make sure I order the fuel line with the correct fittings.
Any finally I recovered from the loft the pedal assembly cover which as you can see is a bit of a mess, will be spending some time thinking how I can bring this up to standard, perhaps carbon fibre ? 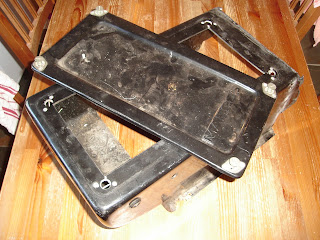