Whilst waiting for some bits to arrive in the post thought I would attack the pedal box cover with the Dremel. Previously I had tried to do a refit of the pedal box and found it was not really a good fit (traditional Marcos I suppose!), it was too long in that there were slight marks on the bottom front curve where the front wheel had rubbed and both sides were bending out at the bottom making it a poor fit. 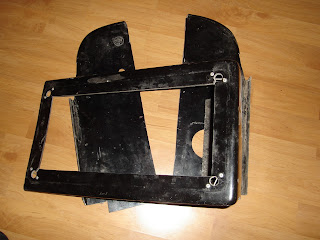 So, after cutting approx 1 inch off the length so it no longer fouls by the wheel I then cut off each side panel and will reglass them back on straight, there are also a couple of holes cut into the cover which appear surplus so will fix those as I assume it needs to be a good fit with no gaps/holes etc to stop fumes from the engine bay coming into the car.

Still temped by the Carbon Fibre look and may consider this option for the pedalbox cover instead of the usual black paint to see if it's as easy as it looks and how good the end result is,