Busy but not much to show

Covered the passenger side battery box/footwell top cover and nice it looks too. 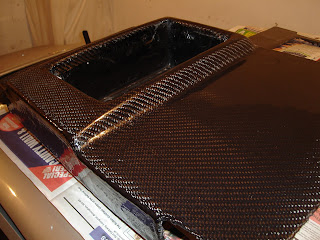 Decided to return to a couple of problems I got previously stuck on. I knew from the start of this project there were always going to be a few snags in such a one off car, however I have always put things to the side and returned to them at a later date with fresh enthusiasm and ideas. One such problem was that having installed the engine and gearbox I found that it was fouling the chassis on the clutch cylinder housing, after rummaging through my box of bits to fit (which is getting smaller now so I must be making progress) I found a 1/4" engine mount spacer so loosening of the drivers side mount and carefully jacking the engine up from underneath I managed to slide the spacer in place and heh presto problem solved, what was I worried about after all.
Next problem was the new exhaust manifolds, one of them on the drivers side was slightly touching the chassis also however with the engine now sitting slightly higher on the driver side the problem rectified itself, result ! However, the passenger side is also a problem in that again one of the manifolds is touching the chassis as it curves underneath the bottom rail at the front of the footwell, having got the car high up on ramps and axle stands and having a good look there was no way around this problem other that cutting the manifold off at the bottom and welding in a fresh extension piece, i've done the cutting but run out of time and need some argon gas and stainless steel wire for my mig welder so will have to complete this job next week,
Martyn
18/03/2010.
P.S. Writing this blog on my 2004 computer and apparantly there's something called a ipad2 out next week, might have to dip into my funds a little.
Posted by Martyn