I had to send one of them back to Guaranteed Exhausts as it was slightly catching on the chassis, not blaming Guaranteed Exhausts as it was always going to be a tight fit and fitting new engine mounts the new engine was probably not sitting exactly the same as the old one hence the problem. Anyway got a phone call several days ago to say the adjustments had been made and was being sent out to me, anyway I left it a few days as getting on with other stuff and on making enquiries it turned out that Business Post had apparently tried to deliver the item to me on two consecutive days and posted a card through my door telling  me they had been, slightly annoyed as clearly this parcel company didn't post any card through my door and therefore sent the manfiold back to the sender after a week as I had not collected it from their depot causing much inconvenience. Thanks to Guaranteed Exhaust systems for sorting the problem and sending the manifold back to me next day delivery with another courier, a company I can recommend.

Have just fitted the manifold in place (fingers now v-sore) and would suggest anybody else on a rebuild to fit the engine and manifold in place before the body as it was really awkward to attach the bolts with very little room to work. I can now give some serious thought as to what I am going to do about the ideas I have for a different exhaust system and this will have to be sorted before I can get the car back off the ramps. 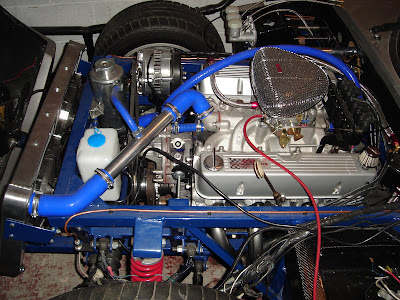 Other jobs done are new horn fitted, went for a Stebel Nautilus which are apparently very loud and mounted it as near the front as possible, being very low down and easy to miss I thought this would be a good safety factor as many near misses previously in my little MG. Windscreen washer bottle fitted, windscreen wiper motor now back in place and various other little jobs done that I can't recall at the moment.

Hi Martyn,
Any chance you could upload a video of the horn in use? the Horn is something I have to visit in the future as my existing one was knackered!
Thanks.

Have not connected it up yet to the loom, you could try the Stebel website,

keep going with the project,