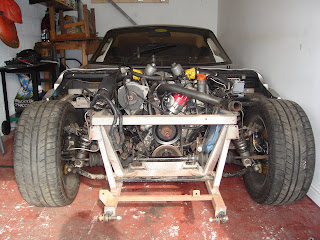 Sunday morning and sunshine most welcome.

Despite only getting home from work at 5.30 (am not pm) and being up again at 8.00 to take Louis to football (won 3-1) on my return i made straight for the garage.

The bonnet is now off, wiring loom moved out of the way and reveals a rather business end of the car, the radiator and twin fan unit is safely in the loft making sure it was completely empty before walking up the stairs with it, i think i would have been shot if it had leaked mucky green water all over the stairs carpet.

Whilst off the complete Bonnet/front end assembly which also houses the twin headlights and pod as one complete unit was weighed and came out at a amazingly 41 pounds, this is one light car !!

I have been pre-reading the Marcos "forum" which is full of useful guides on previous restorations and the body tub is held onto the chassis by some 50+ self tapping screws and as the previous owner had already temporary removed the body just before being sold i have been saved a lot of work in having to drill these screws out. According to a Marcos Owners Magazine from 1997 that i have it recommends at least 4 willing people to help with the body removal with one on each rear wheel arch and two on the front bulkhead guiding it around the chassis and checking for snagging points, fingers crossed then raising the body slowly at the rear upwards at an angle and then backwards leaving hopefully a chassis complete with engine and full running gear still in situ and being most careful not to stress the body shell, if the shell is not handled carefully the front windscreens have been known to crack under the pressure, at £470 each fingers and toes will most certainly be crossed.

i have got all the materials needed to support the body shell from the garage roof.
all you need to do is arrange the assistance for each corner.